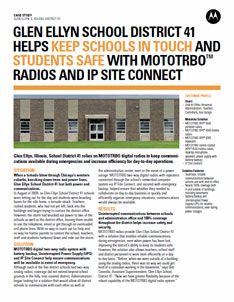 When a tornado blew through Chicago's western suburbs, knocking down trees and power lines, Glen Ellyn School District 41 lost both power and communications. In August of 2008, as Glen Ellyn School District 41 schools were letting out for the day and students were boarding buses for the ride home, a tornado struck. Teachers rushed students, who had not yet left, back into the buildings and began trying to contact the district office. However, the storm had knocked out power to two of the schools as well as the district office, leaving them unable to use the telephone, email or get through on overloaded cell phone lines. With no way to reach out for help and no way for frantic parents to contact the school, teachers, staff and students hunkered down and rode out the storm.

MOTOTRBO digital two-way radio system with battery backup, Uninterrupted Power Supply (UPS) and IP Site Connect help ensure communications will be available in event of emergency. Although each of the five district schools had two-way analog radios, coverage did not extend beyond school grounds in the hilly, tree-covered district. Administrators began looking for a solution that would allow all district schools to communicate with each other as well as the administration center, even in the event of a power outage. MOTOTRBO two-way digital radios with repeaters connected through the school's networked computer system via IP Site Connect, and secured with emergenc backup, helped ensure that whether they needed to collaborate on day-to-day business or quickly and efficiently organize emergency situations, communications would always be available. 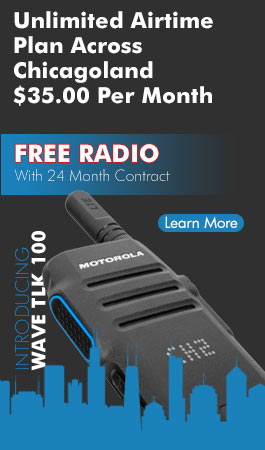 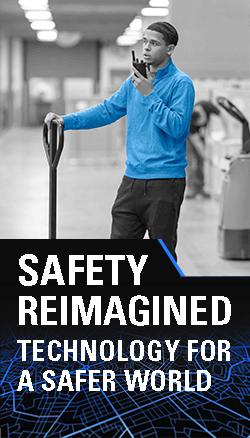 We have over a 100 videos available on our website. Find out about the latest Motorola product releases.